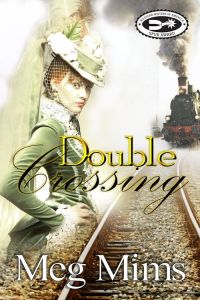 Author Meg Mims describes her historical Western mystery-adventure, Double Crossing, as a sort of True Grit on a train. It’s an apt description, with a determined heroine, Lily Granville, setting out from Chicago in 1869 to track down her father’s murderer and hiring an unknown tough guy, the Texan Ace Diamond, to help and protect her. The deed for a California quicksilver mine has also gone missing, with neither the killer nor Lily knowing where it is, and presumably the mine’s ownership is the motive for the murder.

To thwart the plan, Lily boards the newly completed First Transcontinental Railroad to join her uncle, now her legal guardian, in Sacramento. The train serves as the story backdrop, with the dangers of wilderness travel heightened by the killer’s ongoing attempts to locate that deed (as no one seems to believe that Lily doesn’t have it hidden away in her luggage or corset). Lily must also learn to work with and trust her former Confederate cavalry protector, a task Diamond does little to assist.

Double Crossing is a classy debut for Mims. Although the mystery is a hair too simple, the adventure plotline is well drawn, with twists and turns like a mountain railroad, and the characters are a crafted balance of believable, historically accurate, and sympathetic. Mims treats the setting as an extra character, with well-crafted descriptions of actual places that are accurate to the time period. Her writing is elegant and easy to read, a testament to her MA degree from Seton Hill University’s excellent Writing Popular Fiction program. (No, I’m not biased. Even if I attended the same school for the same degree.) The interspersed Bible verses and inspirational elements are historically accurate, help define the characters, and enhance the plotline.

The romance is kept out of center stage and enough plot elements remain unanswered at story’s end to assure this reviewer that a series, or at least a sequel, is in the works. With most current historical mystery series confined to the Regency or Victorian England, and with the current tendency to ignore historical elements that don’t fit the author’s agenda, an accurate series set in the American West is a welcome addition.

Normally this reviewer would not assign a five-star rating to a mystery that I solved, but here mitigating circumstances include: a) the book’s high quality, with any proofreading errors unnoticed by this reviewer, b) the excellent adventure plotline, characters, and historical accuracy, and c) the multiple “mini-mystery” plot elements that I didn’t solve, including the mine deed’s hiding place. The good easily outweighs the mystery’s simplicity and overturns that rule.

Double Crossing is available at Amazon. The sequel, Double or Nothing, is also available.

This entry was posted in Sweet Reviews. Bookmark the permalink.